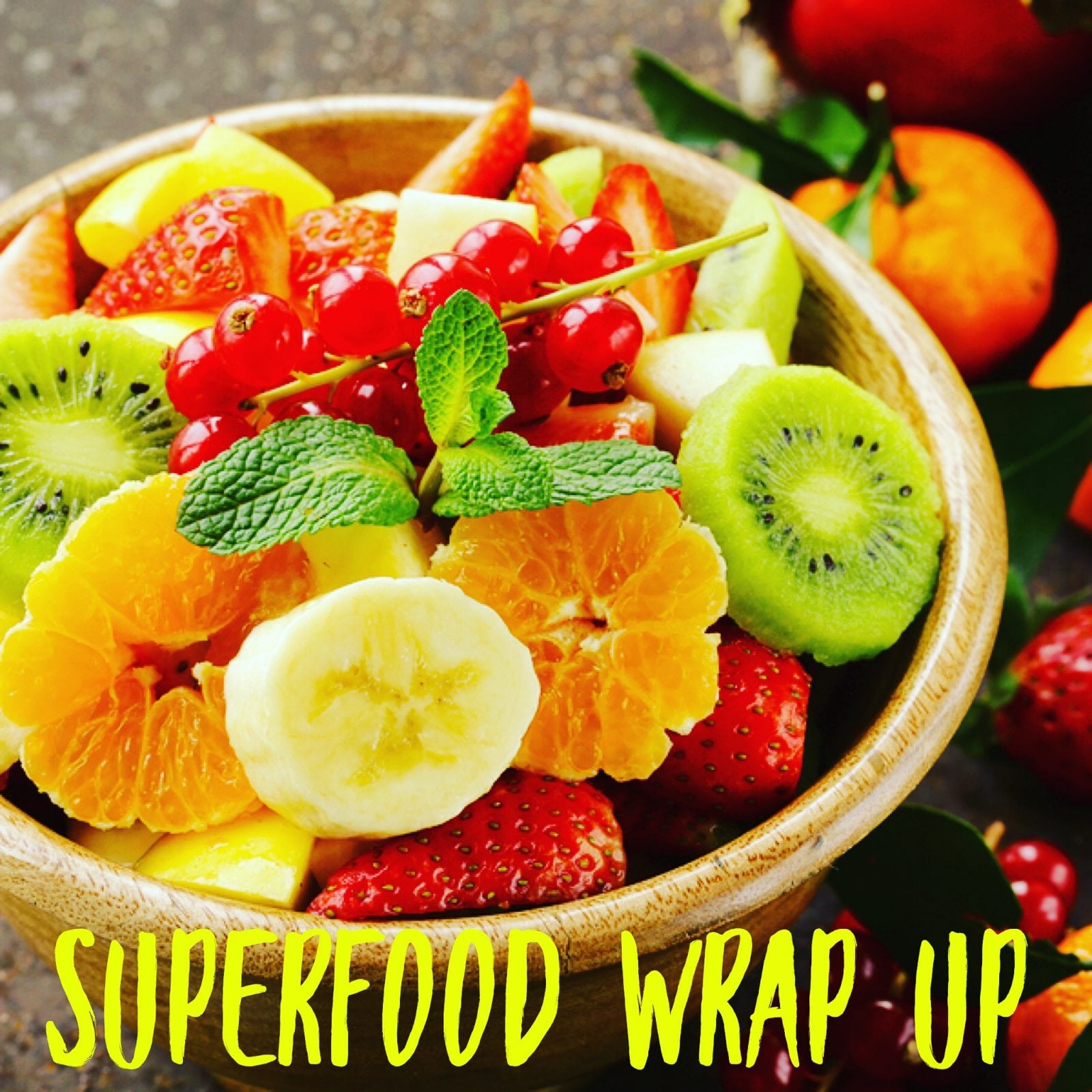 I've been talking a lot about superfoods recently, just because of how powerful they are for our lives.

This is a little bit long of a post, but it's broken up into a few different topics.  First, I want to explain what superfoods are, give you an idea of the many categories, and if you'd like to dive deeper I will talk about some specific superfoods that you should be incorporating into your diet, because each one is different.

Deal? Don't zone out on me here, this is important stuff!

Superfoods are foods that we eat, that are high in nutrients, and low in calories.

Adaptogens - Helps our body recover and deal with stress (Got some?)

Prebiotics - Food for the probiotics

Digestive Enzymes - Releases bonds in the food we eat, so that our bodies can actually break down the food and absorb the nutrients, instead of just getting rid of them.

So that was a super short breakdown of SOME of the categories, there are many more as well, but I also wanted to supply you with some specific foods, and what they each do.  There are two other things I want you to keep in mind though before we go deeper.

1 - Make sure it's sourced from a good spot. Growing it in your back yard, versus where it was initially intended for the food to be created, won't work. It won't have the nutrients.

2 - Don't supplement foods you already eat! Meaning, you go the route of a nutrition shake, which has broccoli, cauliflower, spinach, whatever.... And you normally eat those things (or have access to them). You've got to supplement foods that aren't in your cupboard.

Here's where the post gets a big longer, just because I want you to see the power in EACH of these.

Feel free to zone out, find a solid company that has a nutrition shake you can enjoy, and know that all of this is taken care of for you.... The one I drink is the best out there, shoot me an email if you'd like to see how to get it.

Or if you'd like to see the breakdown, keep reading.

Antioxidants are good little soldiers that fight free radicals in our bodies.

What’s a free radical you ask? It’s an unstable molecule that doesn’t have an even number of electrons. It’s always looking to steal another molecule’s electron so they can get their act together and become stable.

The problem with that is this process damages healthy cells, which could then lead to health problems. And once an electron is stolen from a stable molecule, it then becomes a free radical and is looking for a way to steal back the electron the initial thief stole from them. Moral of the story: Free radicals, bad. Antioxidants, good. Consume foods with lots of them (antioxidants, NOT free radicals)

The acerola cherry grows on small shrubs that thrive throughout South America, Central America, and the southern portion of the United States.

One cherry has 65 times more vitamin C than an orange and about twice the potassium, magnesium, and vitamin B5. The acerola cherry is the second richest fruit source of vitamin C in the world. Since vitamin C is water-soluble (versus fat-soluble, like most other vitamins), it bonds to water molecules and gets flushed out of the body rather quickly. So that’s why we need to consume vitamin C on a daily basis. The vitamin C in acerola cherries have higher absorbency rates into the body than other natural sources. Plus, acerola cherries also contain other key minerals our bodies need, such as calcium, iron, phosphorus, thiamin, riboflavin, and niacin.

They help to promote muscle strength as well as support cardiovascular health. They’re believed to help reduce various signs of aging while promoting a luminescent glow to the skin. Not only are goji berries rich in vitamins and minerals, they’re also a great source of natural proteins. They’re packed with 18 of the 22 amino acids, 21 dietary minerals, more beta-carotene than carrots, more vitamin C than oranges, and plenty of linoleic acid—which may help keep your hair thick and your skin looking young.

BUT NOT ALL GOJI BERRIES ARE CREATED EQUAL!

The best goji berries grow high up in the Helan Mountains, in the Ningxia Province of China. Ningxia is more than 10,000 miles from the west coast of the U.S., and these berries contain natural adaptogenic enzymes, which are there in abundance only when grown at extreme altitudes with just the right environmental conditions.

Goji berries need to grow on hillsides where there’s sun, but they can’t be planted too high or too low. They grow in clusters by the hundreds in both wild and cultivated areas, as well as in protected valleys. They’re a very high-maintenance fruit, but they’re worth it—because YOU’RE worth it! And that’s why you should only buy from goji farmers who have the passion and experience to grow and harvest the world’s most premium crops.

While both blueberries and bilberries are loaded with antioxidants and anthocyanin, bilberries typically contain up to four times more of those goodies then blueberries. Plus, bilberries are extremely rich in vitamin C.
And for the last 500 years, these little “blue” berries have been used all across Europe for medicinal purposes.

Adaptogens are just what they sound like: substances that have traditionally been used to help the body adapt and respond to the effects of stress—and they’ve been being used by cultures across the planet for centuries. These are more holistic approaches, traditional practices, and ancient wisdom to offer ingredients that can help promote homeostasis, or balance, in the body.

Has antiviral and anti-aging properties. It’s a diuretic, meaning it helps flush out bacteria, viruses, and inflammation. It helps build up your immune system and does a great job at protecting the liver from toxins. In other words, this adaptogen keeps you healthy and young.

Ashwagandha root helps to keep the central nervous system healthy. This can help with disorders in the CNS like epilepsy, stress, and neurodegenerative diseases such as Parkinson’s and Alzheimer’s. Practitioners also prescribe ashwagandha root to reduce stress and as a sleep aid.

In Chinese and Japanese herbal medicine, the maitake mushroom is coined the “medicinal mushroom.” This mushroom is rich in potassium; calcium; magnesium; vitamins B2, D2, and niacine; fiber; and amino acids. Maitake mushrooms posses anti-cancer qualities, has the power to regulate blood pressure, insulin, glucose, and liver lipids like cholesterol, triglyceriedes, and phospholipids.

Helps with sexual dysfunction, but can treat an array of conditions, including treatment of arrhythmia, gastric spasm, gastric atony, consumptive cough, excessive sweating, kidney and liver health, and autoimmune diseases. And recently, British research shows that cordyceps may be a valuable tool in fighting cancer. But wait, I've got one more thing I found that I need to share with everyone looking to break any records.  When Chinese athletes broke world records in track in the 1992 Olympics, everyone accused the athletes of steroid use. But the athletes attributed their success to cordyceps, claiming the fungi promoted efficient use of oxygen and increased blood flow to organs.

Also known as the “supernatural mushroom,” these fungi have been used in traditional Chinese medicine for over 2,000 years. Reishi mushrooms contain a group of triterpene phytonutrients called ganoderic acids that have anti-viral and anti-bacterial qualities. Researchers have found the reishi mushroom can be used to lower blood pressure, blood sugar, and cholesterol. It is also currently being studied for its anti-tumor qualities and ability to protect against liver disease.

Studies suggest that the leaves boost insulin secretion, thus acting as a pain killer ; lower cholesterol; and have antioxidant, immune-boosting, and stress-relieving properties. Practitioners prescribe the leaf of this plant to treat common colds, headaches, stomach disorders, inflammation, heart disease, and many forms of poisoning.

A native of East Asia used in traditional Chinese medicine. Schisandra is believed to help with energy and focus, and can help resist infections; improve skin health; and fight off insomnia, coughing, and thirst. It has also been used in Chinese medicine to help protect the liver, stabilize blood sugar, lower cholesterol, and as a stimulant to increase energy levels.

Native of China, assists with clarity and attention span. And if that’s not enough, in Chinese medicine it is often used for increasing blood flow to protect against blood clotting, and to ward off vertigo.

Those included in the nutrition shake I drink are: Yacon Root, Chicory Root,  Bacillus coagulans , Amylase, Cellulase, Lactase, Glucoamylase, Alpha-Galactosidase, Invertase.
What are they used for?
Your intestines are loaded with bacteria—and much of it is hugely beneficial in a number of ways, including helping properly break down food and creating important nutrients like short-chain fatty acids.
Probiotics such as Bacillus coagulans are digestible forms of these beneficial bacteria. Prebiotics, including yacon root and chicory root, act as food for these important little critters.
Consuming a combination of the two can help support the biome in your belly, therefore supporting a healthy digestive system.
Enzymes are catalysts that facilitate chemical reactions.
Digestive enzymes, in particular, break down the food you eat, therefore helping with nutrient absorption. Amylase, for example, breaks down carbohydrates.\ Lactase breaks down dairy.  Most of them end with “ase” at the end of the word.

But why are all of these important?

Because if you're not incorporating them into your diet CONSISTENTLY, your body won't be able to utilize the other foods you eat to its full ability.
Our bodies can only digest certain nutrients on their own.  For the others, we need enzymes and healthy probiotics to help release the internal nutrients stored inside.
In other words, it has a tough outside "Shell" our bodies can't break.  But the enzymes and probiotics breaks them for us, which releases them to be digested and uploaded into our system.
Ok, I'm done torturing you.
If instead of worrying about getting these items individually, making sure they are sourced from the best places, and then actually making them taste good so you can consume it consistently, connect with me so I can talk to you about the nutrition shake that I drink, that contains THEM ALL and actually a few more.   As you can see, getting these individually would be super expensive, and my nutrition shake is the best out there so it isn't cheap, but it's worth every single penny in my book.
Thanks for reading, you must be serious about your nutrition.